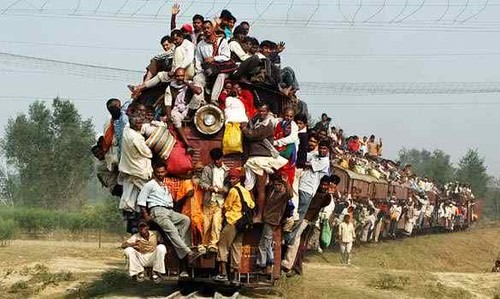 Introduction: Population problem, like energy crisis, is one of the most talked of topics of the world these days. It is the burning question of Bangladesh. Now the world has a population of about seven hundred crores. The population of the world is increasing day by day. It is creating many problems.

Population of Bangladesh: Bangladesh is the most densely populated country in the world. It is a small country of 147570 square kilometers. But it has a population over 16 crores. Every year more than two million people are being added to our population. The problem is now out of control.

When it becomes a problem: Though the population of a country is an asset, it becomes a problem when the country can not afford to give people the basic necessaries of life like food, clothing, education, medicine and shelter etc.There are many causes of rapid growth of population. Nowadays owing to better explosion of medical facilities and improvements of standard of living the death rate has gone down much but on the other hand the birth rate is on the constant increase. Early marriage and literacy rate are two important causes of the growth of population. The population of our country is increasing at an alarming rate.

It’s effect: The area of Bangladesh is too small to support her vast population. As a result it creates the following problems.

Communication problem: There are crowds everywhere in buses, trains, bazars, schools, colleges etc. People climb on the roof of the buses and trains to travel one to another as there is no room inside. This causes the accident.

Unemployment: In the field of employment this condition is hazardous. For one single vacant post there will be thousand candidates. Thousands and thousands people are out of work in the country.

Shelter problem: The area of Bangladesh is too small to arrange shelter for the large number of population. In our country some people sleep under the open sky,under the large tree, at railway station.

Health problem: ”Health is wealth”, but our people are suffering from many diseases. Many children of our country are blind because they do not get enough nutrition. Our children often suffer in diarrhoea.

Medical and medicine problem: The large number of population creates the treatment problems too. There is only one qualified doctor for every 25,000 village people on the average. They also do not get proper and sufficient medicine.

Environmental pollution: The increasing people pollute our environment by making latrins on the bank of rivers and canals. Human waste pollutes our environments.The vast population also produce so much carbon dioxide which is danger for the environment.

Poverty: The increasing population of our country is creating pressure to our wealth. So day by day we become poor.

How to remove it: We should all come forward to control it. The government of Bangladesh is trying to control it. To remove this problem we should follow the following arrangements.

Family planning: Each family must not have more than two children. Then each family will be planned. They should be made aware of the gravity of the problem.

Others: We can export man to other countries to remove the population crisis. To remove this problem, the lesson of self reliance is particularly needed for us.

Conclusion: The population problem is a great malady for Bangladesh. But this can be solved if the government and the people are firmly determined to control birth rate and grow more food at the same time. No improvement is possible unless this problem is solved. Therefore, all the people of Bangladesh and the government
should join hands to meet the crisis right at this moment before it is too late.